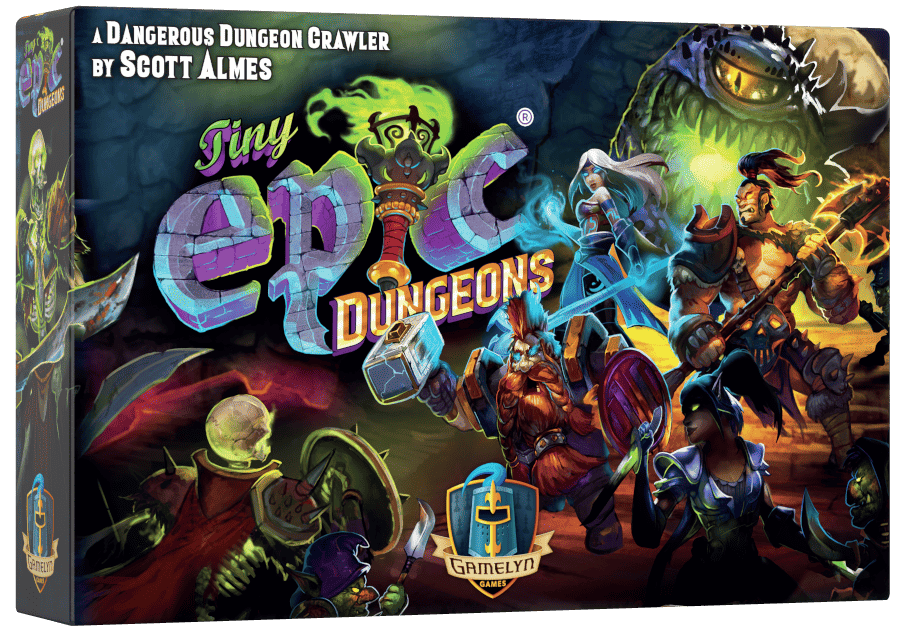 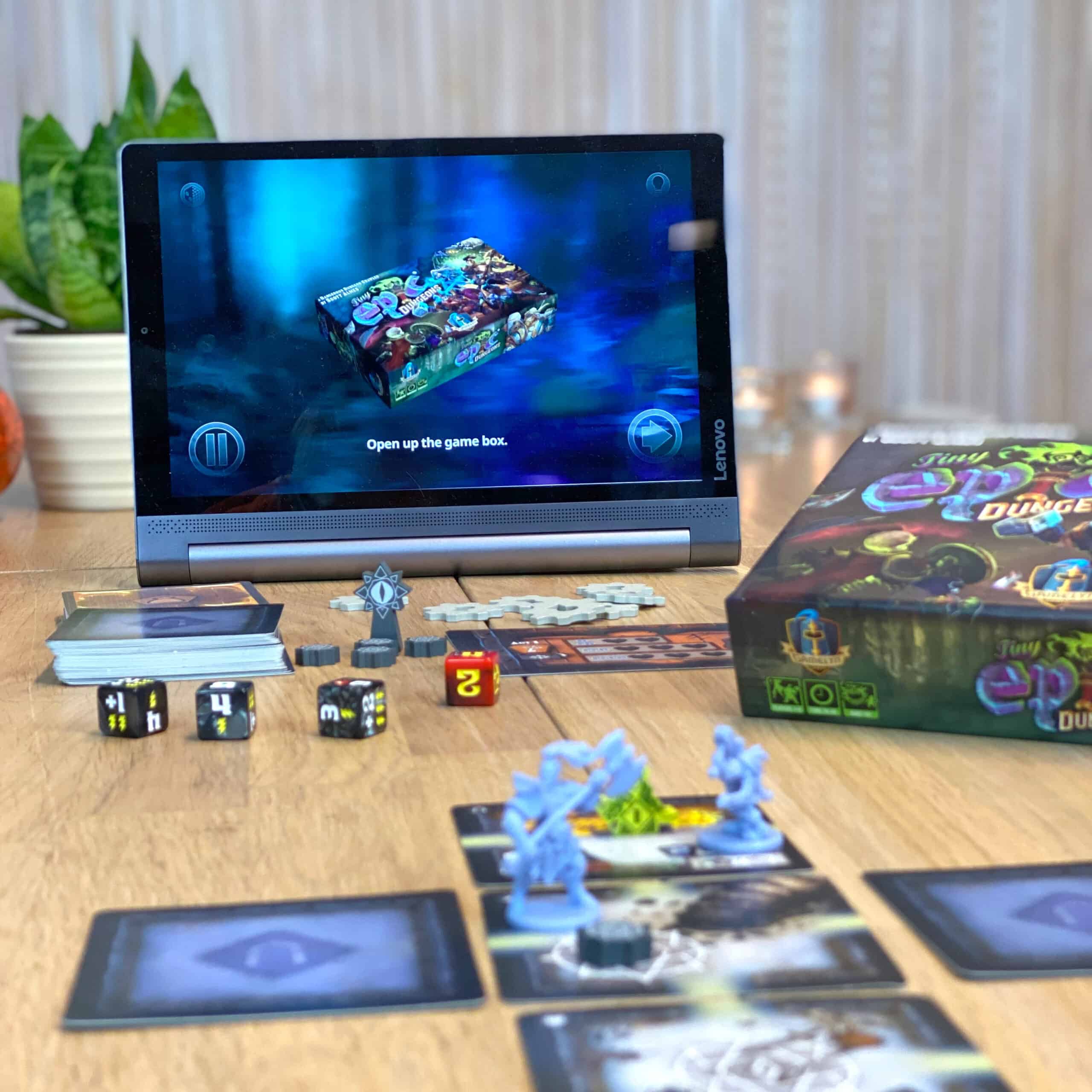 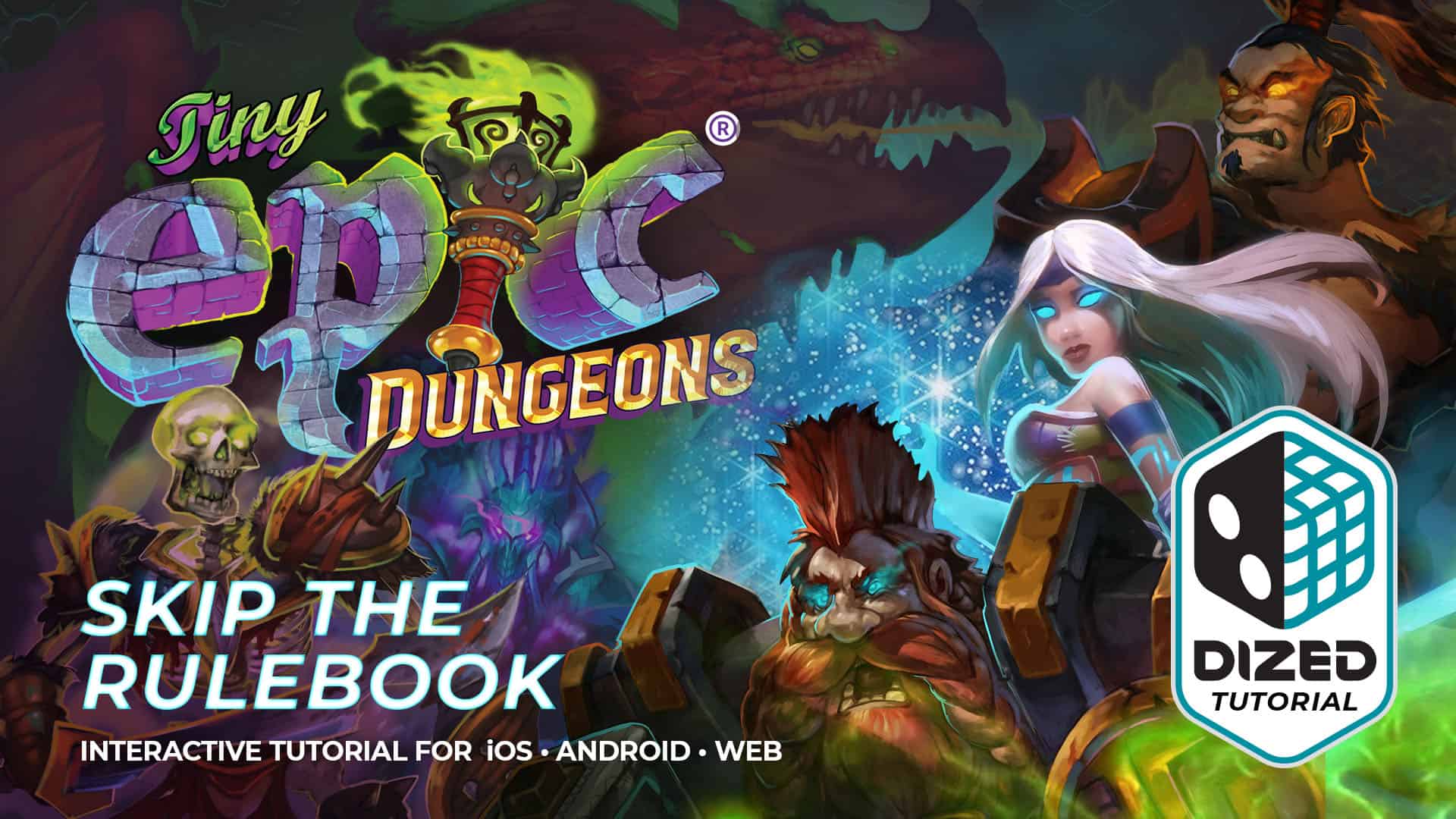 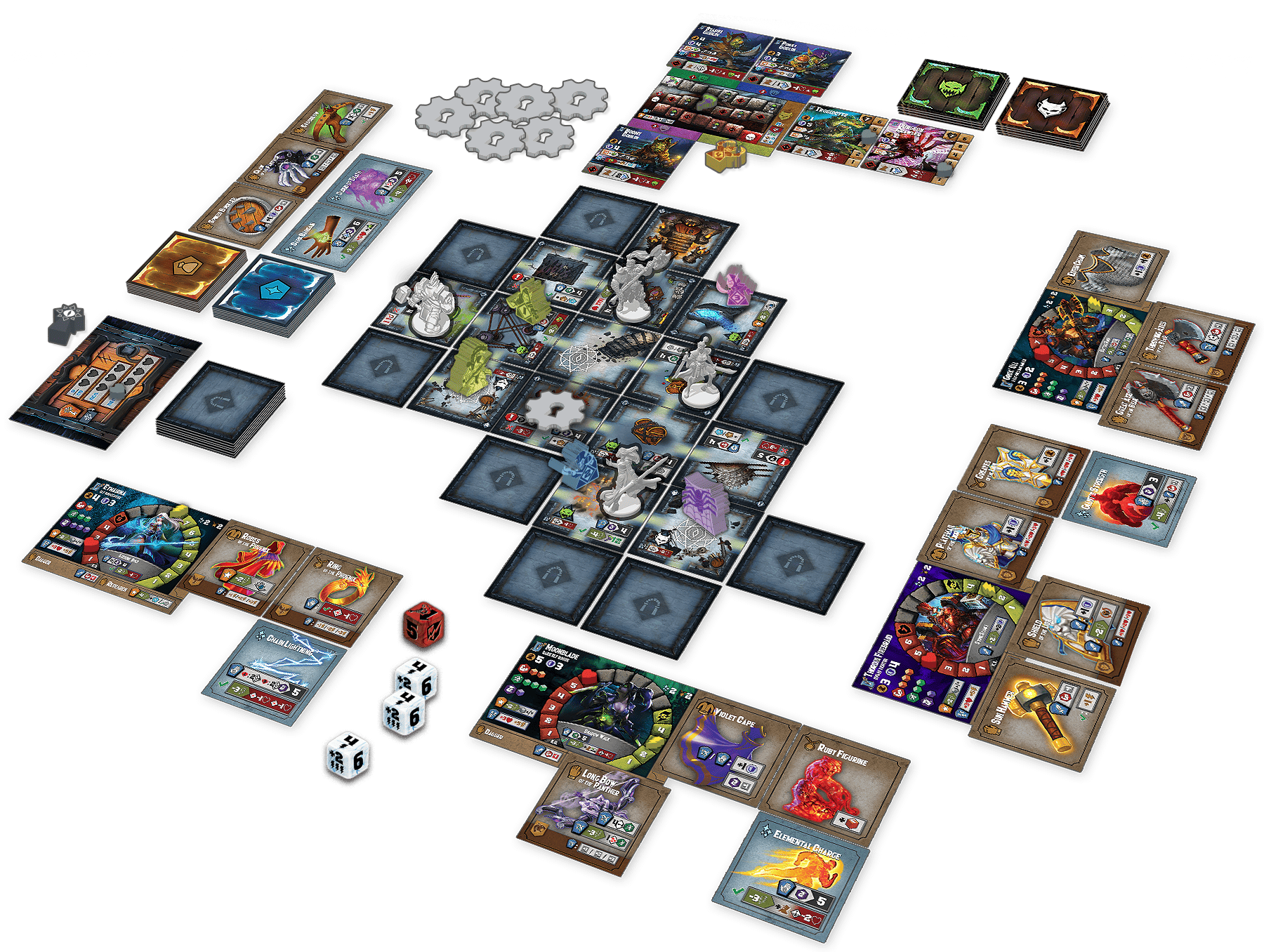 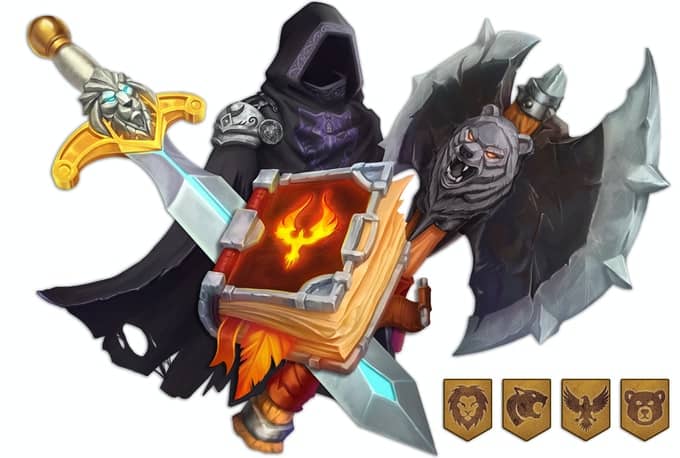 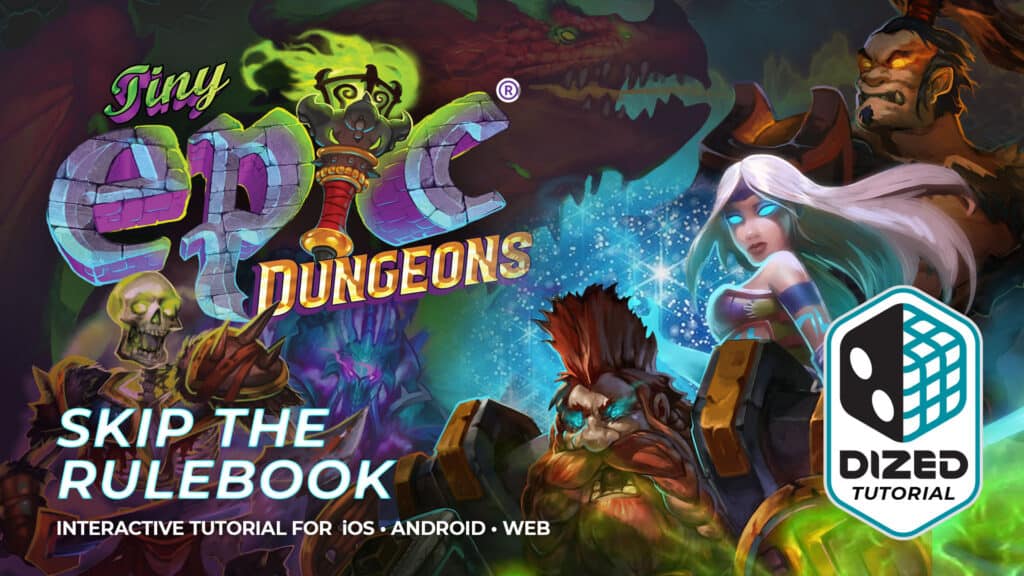 CHECK OUT THE RULES FAQ

Tiny Epic Dungeons is a fully cooperative dungeon crawler for 1 to 4 players set in the fantasy world of Aughmoore.

In Tiny Epic Dungeons, players control a band of Heroes exploring a treacherous dungeon in search of the fearsome Dungeon Boss. Heroes make their way through the dungeon one room at a time. Around every corner goblins and ferocious minions seek to block the Heroes’ path. Where there isn’t an enemy, traps are set, ready to spring on even the most prepared Hero.

Tiny Epic Dungeons features a modular dungeon that is unique with each play.

The game is played over two acts: The Dungeon, and the Dungeon Boss. In both acts, the players are constantly struggling against the waning firelight of their torch which decreases each turn. When the torch goes out, the Heroes are forever lost in the darkness.

After clearing the dungeon of all its’ minions and finding the entrance to the lair, players must engage in an epic battle against the Boss. Each boss has unique abilities and a lair with a unique environment that gives various advantages and disadvantages depending on the skill used and where the Hero attacks from.

These Epic Monsters cannot be slain by mere swords, axes, arrows, and the occasional spell. Ritual Rooms around the dungeon must be used to lower their magical bond to the dungeon. The Dungeon boss must be lured to these rooms to lower their defenses and allow the Heroes to strike the final blow!

Victory in Tiny Epic Dungeons is achieved by defeating the Dungeon Boss! In order to do that, the Heroes will need to collect legendary loot and supreme spells

Heroes of old crafted loot to honor the ways of their clans. Bear, Lion, Phoenix, and Panther. Heroes can discover pieces from these ancient sets that grow more powerful the more you collect.

Will you be the greatest warrior the Bear clan has ever seen? Or will you make the Panther clan proud by stalking your prey and striking with surprising force, unseen before the moment of impact?

The story is yours to tell in Tiny Epic Dungeons!

The Potions & Perils mini-expansion brings a whole new element to the game in the way of Potions and the perilous alchemists that concoct them… the Mixy Goblins!

Additionally, the mini-expansion brings new Dungeon Bosses, Minions, and Goblins to the game. Each presents a unique challenge that will test even the best players!

Not sure Tiny Epic Dungeons Deluxe is best for you?

NOT THE BEST FIT IF 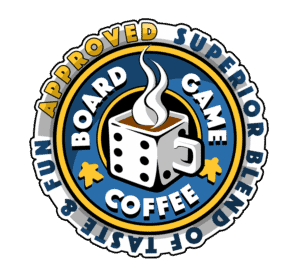 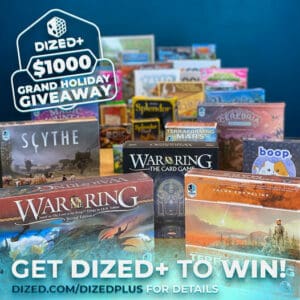 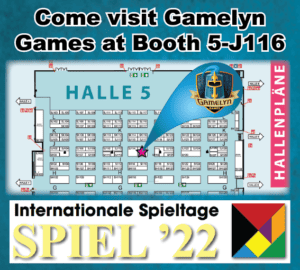 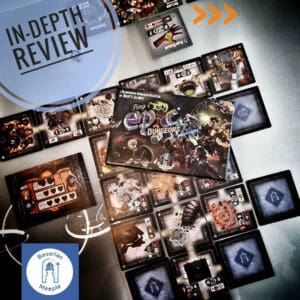 Arthur Aarnio
Excellent game, and i just love the franchise. I hold this near and dear to help me through difficult and easy times in my life. Thank you for making this <3 I would suggest this to anyone who likes dungeon crawlers or board games.

Alonso Alegre
After playing for a little while I can say that this is the Dungeon Crawler that I've been waiting for. Many of us adult people, some of us beign parents, don't have enought time anymore to play 2-3 hours dungeon crawlers or anythign similar, a fahc that makes us think twice before putting a boardgame on the table. This game gives me that feeling of a dungeon crawler with TONS of replayability for many reasons. Two of them being the extense combination of heroes, each one of them havign their own abilities, which makes it have variety when playing (like support, melee, etc). Another reason is that you NEVER will have the same dungeon on each play. Regarding Icons, wow.... a huge ammout of icons, but I actually ended up loving it. I love how Gamelyn games managed to have such a big game with so much details and a lot of thigns going on and fit them in such a beautiful small box is VERY smart. At the end, after some games you end up understanding the game and the gameplay turns veyr smooth when playing. Even after readign the rules book I still had some questions during the game, so I ent to the appendix cards, which came in handy. And if it's not enough (becaus I found myself in several situations where I was like "ok, how does this go regarding priority" like any board game) I went to the BGG website (Board Game Geek) and there is a HUUUUGE active community willing to answer any questions and clear any doubts about this game in no time. You guys can tell that I really like this game and I'm happy I found it. Gamelyn Games seem to know their target very well when creating games for us. Thank you guys.

Pierre Touratier
What an amazing game! Juste one attempt but a successfull attempt with a lot of luck ! Addict to dungeon crawlers this one is now one of my favorite ! Can't wait to do another try !

Austin Simmons
Great game! Highly recommend, but there is a bit of a learning curve. The bosses not having their own meeple included was a bit of a let down and the hero figures are a bit hard to keep track of due to them all being the same color plastic. You also quite honestly need the appendix to play the game properly (available online) as the icons and reference sheet(s) don't do a great job leading you towards properly deciphering what each card means, after reviewing the thing I realized how incorrectly I was playing. All things considered though, this is a small box game it's understandable that some pieces/parts weren't included. The goblin mechanic adds a level of threat management while you're exploring, and the torch tracking does a wonderful job keeping the pressure on even after you've had time to strengthen up. Overall it does what it sets out to do well, simulate a co-op dungeoncrawl in a speedy fashion. Can't wait to pick up the stories expansion and other goodies!

John Buckett
What a fantastic game! Played three times solo and absolutely love it. Great mechanics and theme, top quality components and endlessly replayable. So much can happen in each game. Got the Stories expansion and am excited to try the Epic dungeon!

Vidas Adiklis
This is my first EPIC game from the series, however me and my board games squad really like it and are considering on checking out other EPIC games. Our group really likes dungeon crawlers, but what differentiates this from the other games is the torch mechanic that makes you think your moves and not just walk blindly trying to explore 100%. Nice visuals like miniatures and tokens adds to immersion and minis will look even better when I will paint them. The only con that we can think of is that we would like to see more item sets, but this may also be hindrance, since it would make it harder to collect sets.

Klaus Green-Andersen
This is my go-to game for a bit of solo fun while the girlfriends are watching "low calorie" television. It's incredibly fast to set up, it's fun and challenging, and after you get the hang of the iconography (which admittedly is on par with a Mindclash game!), you can play the game incredibly fast. I really appreciate the huge amount of bosses and characters. It makes for a very varied experience. When not playing solo, it's all the fun of a dungeon romp with like next to no setup and teardown time. So fast, fun, and furious.

Alejandro Merlos
An excellent Dungeon Crawler. After 4 or 5 plays to understand the iconography, the game feels really light to play, offering a deep experience. Running through the dungeon and getting geared gives a nice leveling feeling. Dice mechanics are incredible.

Nicholas Martel
I was mildly iffy about this one. Out of most of the Tiny Epic line, I only really enjoy Zombies and Dinosaurs. I can say without a doubt, that has expanded to Dungeons as well! The detailing on the minis was a real surprise. The play mats look sharp and card quality is, of course, solid. I got everything but the bag (planning on that!) and the wooden screen printing on the wooden goblin, mini boss and boss monster meeple came out great! Dized seriously helped learn the ins and outs of combat. If you're looking for a board game that feels like a roguelike video game, this definitely scratches that itch on the tabletop! Tough as nails, but victory tastes oh so sweet. If I had to complain about anything, it's very minor gripes. There's a boatload of iconography to remember, though there is a player aide to help that. As usual, packing it back in the box is a pain in the neck. Definitely recommend this if you looking for a great D&D roguelike adventure! ❤️

OVERALL RATING
Based on 11 reviews by users who bought this product.