Disclaimer: Tiny Epic Pirates, the Crimson Silver mini-expansion, and premium dice were provided to us by Gamelyn Games for review.

Phil: The Tiny Epic series has tackled nearly every popular theme under the sun, from Zombies to Fantasy, Westerns to Galaxies. So it was only a matter of time that Pirates would be featured in one of their games.

Luke: And frankly, this is a theme I’ve been waiting to be touched on for some time. I’ve been a fan of the Pirates of the Caribbean franchise for some time (although I don’t regularly acknowledge that last 2 films), and the idea of sailing the high seas has always been an idea that board games have thrived in when adapting. Phil: In Tiny Epic Pirates, your goal is to out-pace other would-be pirate lords to bury your 3 treasure chests. Moving your pirate captain around a rondel, you’ll be selecting various actions to collect goods, sell them for gold, and use that gold to find a good spot to hide said chests.

Luke: On your turn, you’ll move your pirate captain 1 or more spaces, depending on how many helper meeples you’re willing to dedicate to your movement. Once you’ve moved your ship across the map, you’ll trigger your chosen ability: – Pillage: If you’re in a space with a town, you’ll be able to draw 1 or 2 good tokens (depending on what’s listed at that space) from the goods bag, adding them to your hull.
– Sell: If you’re in a space with a store looking for a good type that you have, sell as many of that good type as you wish, earning gold equal to its current cost. Then, move that good to the bottom of the good track, reducing its value to the lowest possible value.
– Lookout: If there’s a lookout token in your space, flip it and gain the reward shown. Rewards could be resources, like gold or goods, or one-time use tokens, giving you boosts for future actions.
– Crew: Draw 1 of the 3 crew member cards from the display. Each will give you abilities triggered when you take specific actions and allow you to deal more damage during combat.
– Cannons: If you’re in a space with another ship, either merchants or other players, roll dice equal to your attack value. Each time the value of a die matches a value listed on your captain and crew cards, add 1 hit to that combat. Whoever has the highest hit value wins; if it’s a merchant ship, gain the good it’s carrying and any benefits listed on its card. If it’s a rival player, go up 1 space on your legend track and apply any effects listed.

Phil: Your chosen action may gain a bonus, based both on your crew effects and on the helper meeples. If there are meeples in Rigging, you get additional movement, and if you have meeples in Cannons, you will deal additional damage.

Luke: The final action type, which is at the top of every player’s rondel, is the Hideout action. When taking that action, players will, if there is a vacant hideout in their space, move to that hideout and retrieve all their helper meeples, redistributing them to positions as they see fit. While seemingly sub-optimal, this action can be important for a multitude of reasons.

Phil: Whenever a player completes 1 circuit of their rondel, the Armada token will move in an attempt to attack your ship. If it successfully reaches you and you aren’t in a hideout, 2 of your helper meeples are assigned to repairs, preventing you from using them until you take a future hideout action. Luke: While those are the bare bones of the gameplay loop, there are a lot of moving pieces to consider, and they all coincide to make a decidedly mixed experience. Most of the players I’ve introduced to this title have walked away feeling less like they were a pirate and more that they were a merchant with a penchant for theft.

Phil: It’s true that most of the actions illicit a pick-up-and-deliver vibe. The most consistent way to earn gold is to Pillage and use your Cannons against merchant ships as often as possible, selling when you have a decent hull’s worth of goods.

Luke: While combat is clearly heavily encouraged by the design, there’s very little interest in attacking other players, as victory is far more inconsistent when your opponent is also rolling dice as opposed to having a flat value to exceed. Additionally, while your Legend track can get you some nice benefits, it takes a lot of work to move up those tracks unless players are destroying merchant ships regularly, unveiling merchants that also boost your Legend status. Phil: What’s far more detrimental to the design is the amount of luck at play. For starters, players start the game with their rondel randomized, meaning no player’s rondel is the same. This could easily mean that 1 player could have a superior action layout, meaning they’ll have a far stronger chance of winning based on that alone.

Luke: But beyond that, whenever you draw goods, it’s randomly from a bag. Whenever you draw a Crew card, it’s from the 3 cards currently available, an issue when not all Crew cards are equal. When you attack something, the dice will dictate whether you win or lose, which could cost you the game.

Phil: To note, yes, there are Surefire tokens, which allow you to set a die to the value of your choice if needed, but it’s rare you’ll get any of these unless you’ve already lost a fight, meaning you’re already likely falling behind.

Luke: I’ve played games where my opponent has drawn incredibly valuable goods back-to-back, selling them and burying their treasure without issue, whereas I was unable to draw a valuable token to save my life. And while you can still make some cash off low-valued tokens, speed is the name of the game, so whoever gets that early lead will probably sweep the table without issue.

Phil: And while you can attack opponents, the only detriment to them is the temporary loss of a helper meeple as it’s sent to the repair space. So once someone has a good thing going, you can’t really stop it unless luck favors you.

Luke: Oh, and there’s the luck of the map. At the start of the game, all the map cards are placed randomly, with some containing storms. When entering a Storm space, players are forced to send a helper meeple to repairs, slowing down your engine in trying to get to a given space. But depending on how the Storms dot the map, this can be a huge issue, locking new or unobservant players out of the game if they have no available helper meeples.

Luke: Tiny Epic Pirates is a game I wanted to love, just as I have Galaxies, Quest, and Zombies in the past. But so many of the design decisions work against its favor. It thematically feels less like your a pirate and more like a salesman, it mechanically feels chaotic and inconsistent, and games usually end with one player in a commanding lead.

Phil: Players looking for a beer-and-pretzels type experience may find this title a fun time, but I’d recommend one of the abovementioned Tiny Epic games before this one. And if you want a pirate game, Libertalia, while a distinctly different experience, better encapsulates the idea of a pirate crew far better. Verdict: Tiny Epic Pirates is a game for those who are looking to relax with some friends while chucking some dice. It’s a little complex for casual players, but this can be a relaxing romp for gamers who are less interested in keeping score and more interested in shooting their friends out of the water. 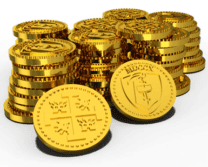