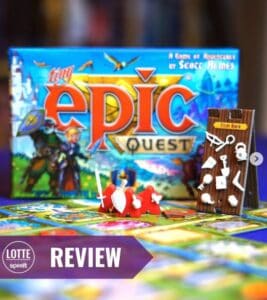 In Tiny Epic Quest, players go on an adventure with their 3 meeples.

The game consists of 5 rounds and each round has a DAY phase and a NIGHT phase. During the DAY players move their meeples around on the play area. This is done over 4 turns, in which the active player selects a way of movement, and all players, in turn, follow this movement. If Quests are completed, they acquire the card and resolve its bonus. 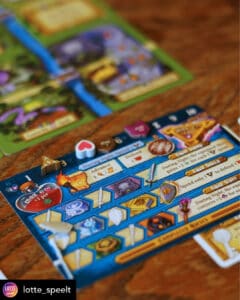 After 4 turns the NIGHT phase begins, in which players take turns either going on an adventure or taking rest (passing). When players go on an adventure, they throw the dice and resolve its effects. These effects have an immediate link with where the meeples are on the board and consist of; getting damage from goblins, gaining power, damaging goblins, conjuring magic, and gaining scrolls and torches to complete quests.

At the end of the game, players gain points for spells, defeated goblins, and collected quests. Also, there is a bonus for each legendary item collected. The player with the most points wins the game! 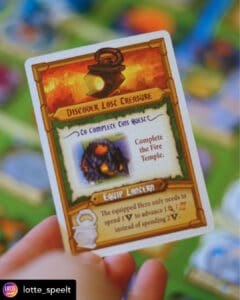 I’m quite charmed by this little game. When set-up it has a big table presence. This small boxed game contains a true adventure, which is perfect to bring along on a weekend trip!

➖ A lot depends on luck of the dice rolls
➖ It’s a bit on the long side
➖ Feels like there might be a way to ‘beat’ the game
➖ Rules seem difficult and long, yet they are quite simple 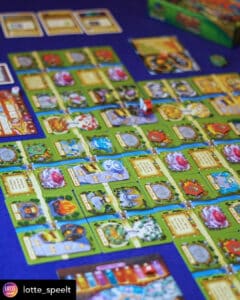 The solo is very easy to handle and feels solid. It’s a beat your own high score and I can highly recommend playing this game solo!  ⭐ 8/10

🙏 This game was kindly provided to me by Gamelyn Games. My thoughts remain my own! 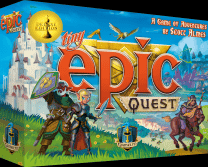 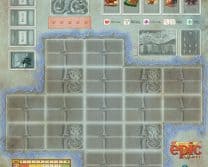