Today I bring you another little gem to explore: the Tiny Epic saga. This saga was known for bringing to the table small board games, but with enormous content. Their first big hit and game that everyone knows them by is a little game called Tiny Epic Galaxies. In this article, I’m going to tell you a little bit about Tiny Epic Dinosaurs.

Tiny Epic Dinosaurs is a worker allocation game that transports the magic of the Tiny Epic saga. Although the box is very small, there is a lot of content to discover. I would like to take this opportunity to mention that the photographs that I will include in this article may contain deluxe material from the game, material that will not be available in the retail version.

That said, how do you play?

In Tiny Epic Dinosaurs , we will play the role of “creators” of dinosaurs. For this, we will have access to our individual farm and another individual board that serves, among other things, to guide the player through the game. Each player also has access to three normal workers and one big one. This is valid for two normals, and can be used in the same place where there are already workers, and the mechanics behind the use of the same place is to use one more than the ones that already exist. For example, if I want to play in a place where another player has already gone with a worker, I can play in that same place using two of my workers or using the big one. Players are even given some resources at the start of the game to make it easier to start life on the farm.

The main board is divided into several sectors, which differ depending on the number of players that will play the game. Each sector of the main board also has several places to place workers, and each place is properly marked with simple but effective symbology so that the player can easily understand what is going on there.

The actions themselves are quite simple.

As this is a game of allocation of workers, the main objective is to carry out actions in the places where we place workers, whether these actions win anything, whether buying or selling, among others. The goal is always to get X to get points out of it. In this case, the objective will always be to acquire as many dinosaurs as possible (without fleeing the farm) to be able to fulfill the contracts we have in our possession.

There are two types of contracts: public and private. Privates are in the data at the start of each match. These must be fulfilled at the same time as we fulfill a public contract. Publics, on the other hand, are contracts that everyone can acquire throughout the game and are available for anyone to play until they are fulfilled. To fulfill them, there is a right place for them to be fulfilled, and the player has to allocate one of his workers to perform this action. Then, just remove the dinosaurs from our farm, which are identified in our contracts, to earn the respective victory points.

However, this Tiny Epic Dinosaurs stands out from the rest of the worker allocation games for one reason, the penalties.

This game is a bit cruel for less prepared players. What happens at the end of each round (the game ends at the end of the sixth round) is that some points have to be safeguarded regarding the conditions in which we keep our dinosaurs. We have to be able to feed them, get them to reproduce, and also ensure that they don’t run away. This last requirement, in particular, is especially painful, as each species of dinosaurs must be separated from the others so that they are protected from one another. The good part is that the player can only be penalized once, even if he messes up several times during the round, but he can still be penalized a total of 6 times, so be careful.

Finally, I would also like to talk to you about the inquiry letters. These cards give you access to special powers or dinosaurs with different characteristics. Each of these new species of dinosaurs is represented by personalized meeples from each one of them, giving a little more life to our boards.

Tiny Epic Dinosaurs lives up to the saga’s name. There are many ways for each player to play and all games will be different from each other as the contract cards are always different, even if only one. It’s a game with little direct confrontation between players, apart from the occasional “you used one of the places you wanted”, but nothing more. It’s a thematically appropriate game and the game mechanics interact well with the theme. It’s normal that the more dinosaurs we have, the fewer resources we produce. I also like the luck factor that is associated with using the die when trying to acquire a new dinosaur for our farm.

The components are also very interesting and of great quality, especially the cards. Meeples can be a bit fragile, so be careful when packing dinosaurs. They may be missing a few legs, or worse.

In short, I think it’s a good worker allocation game that deserves to be played and experienced by many types of players. It can even be a great game to introduce that friend we all have who doesn’t think board games are fun: small, quick to learn, simple and funny.

This review was made possible with the support of Gamelyn Games !

Growing up with Pokémon since I was five years old, I present myself as an incurable lover of the world of video games and board games. My main objective, in every article I publish, is to write in a way that conveys a simple but complete opinion, so that all types of players feel as if they were playing themselves. Above all, have fun!
Click the picture below to find more reviews 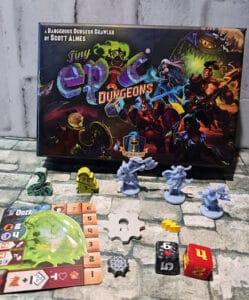 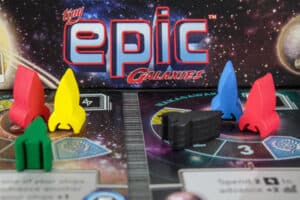