🎲 Here I am back to give you my opinion on a board game Gamelyn Games: Tiny Epic Galaxies BLAST OFF! 🚀😄

In BLAST OFF (a reboot version of Tiny Epic Galaxies aka TEG for experts) you play the commander of an intergalactic Armada who will seek to impose his supremacy on other players by colonizing the universe as quickly as possible! 🪐

I loved this game 💙! The fun and quirky side of the illustrations immediately sets the mood. BLAST OFF remains a strategy game but accessible, the game mechanics are super fluid and the speed of the turns really won me over. Despite this race for victory, the atmosphere is still fun around the table, we go on games, it’s really the kind of game that feels good!

✨ Tiny Epic Galaxies Blast Off is a family game that can be played by 2 to 4 players for games of approximately 45 minutes. Like TEG, players start out as the Commander-in-Chief of their own galaxy. At each turn, we roll the number of dice allowed by our galaxy level (which generates a lot of chaos) and we perform the actions according to the faces obtained. The new features give much more readability and allow a much greater fluidity of gameplay. The simplification brought by BLAST OFF concerning the converter pushes us to use it where it was used very little in TEG! The consequence is a greater feeling of rise in power of his galaxy, it almost makes you want to double the number of points necessary for victory to continue playing 😄!

When the dice roll gives exactly what you want, it’s just luck, but it’s so awesome! I love these moments, and they happen quite often in this game lol Little special mention on the rockets with the cute design 🚀💙 !

So, are you too ready to conquer the universe in Tiny Epic Galaxies BLAST OFF? 😃 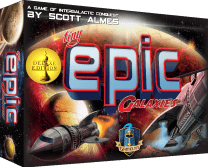